Peter Neyroud is a former Chief Constable, Chief Executive for the National Policing Improvement Agency (NPIA) and a widely published author of books, articles and papers on policing and Editor of the Oxford Journal of Policing. His last major piece of work in policing was a “fundamental review of Police Leadership and Training” for the Home Secretary, which was published in April 2011.

Since leaving the Police Service at the end of 2010, Peter has created a professional research consultancy, is directing a major research programme at Cambridge University into Crime Harm, and is providing training, leadership development and consultancy nationally and internationally.

Peter served in Hampshire Constabulary between 1980 and 1998. He was appointed Assistant Chief Constable in West Mercia in 1998 before being promoted Deputy Chief and taking over the Territorial Operations role in 2000. In 2002 he became the Chief Constable of Thames Valley and in 2005 was appointed Vice-President of the Association of Chief Police Officers.

Peter moved to the Home Office in 2006 as the Chief Executive Designate of the NPIA, and led the £3bn Airwave programme to provide police radios, including the installation of radio in the London underground and for the Olympics and the IMPACT programme to create the Police National Database. He became the Chief Constable, Chief Executive and Accounting Officer for the NPIA, when it was successfully vested in 2007. He was also a member of the Sentencing Guidelines Council, Parole Board, National Policing Board, National Criminal Justice Board and National Counter-Terrorism Board, and is the Independent Board Member for the Internet Watch Foundation.

He was awarded the Gary Hayes Award by the US Police Executive Research Forum in 2004, the Queens Police Medal in the same year and a CBE in the Queen’s Birthday Honours List in 2011. He has a M.Sc. and Honorary Doctorate of Law from Portsmouth University in Criminology and Diploma in Applied Criminology from Cambridge University. He is a Visiting Professor at the University of Chester, a Companion of the Chartered Management Institute, a member of the Institute of Directors and a Fellow of the Royal Society of Arts.

His research interests include: Human Rights and ethics in policing; police use of firearms; police science and technology; Sentencing and parole and their impacts on policing and public safety; Leadership in policing; Applied research in policing

We are grateful to Alpha Translating and Interpreting Services Ltd, for their generous sponsorship towards the costs of holding the Annual Lecture and Buffet 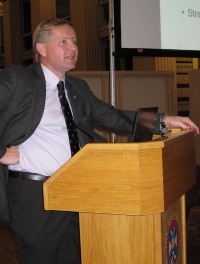