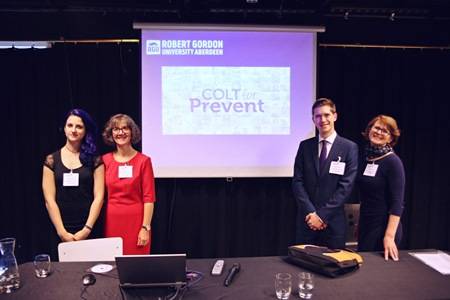 The biennial LEPH Conference, held in Amsterdam, aimed to explore the complex and diverse intersection of law enforcement and public health, and was attended by over 300 delegates, including both practitioners and academics, from 30 countries.

The Group’s session aimed to illustrate the Scottish Institute for Policing Research’s (SIPR) Scottish model of research on public health and protection. This involves a strategic collaboration between 13 Scottish universities and Police Scotland, which aims to produce relevant and high quality research.

This research approach is based on three overlapping models: the practitioner as researcher; embedded research (evidence-based and evidence-informed policing), and organisational excellence.

The Group’s attendance was funded and arranged in association by Robert Gordon University (RGU), SIPR and Police Scotland.

The session commenced with a presentation from Professor Nick Fyfe, Director of SIPR, who illustrated and examined the Institute’s pioneering approach to police research.

Emeritus Professor David A. Alexander then highlighted the framework for research conducted by the Group under the auspices of the Aberdeen Centre for Trauma Research (ACTR), with an emphasis on researching ‘with’ the police, rather than ‘on’. This was evidenced by Inga Heyman with her presentation demonstrating the model of ‘insider-outsider’ collaborative health and police research, which highlighted the role of police officer as researcher.

Dr Midj Falconer presented on her findings from the study ‘Resilience and Well-being in a Scottish Police Force’: an exploration of the ability of police officers to cope with the demands of contemporary operational policing. This was a collaboratively-funded doctorate between SIPR and RGU, as an example of evidence-informed research.

The role of practitioner as expert was exemplified by Andrew Brown, who provided an account of the extensive experience gained from his police career, to that of academic and expert. This was then further demonstrated by DCI Samantha McCluskey, from the Domestic Abuse Task Force, in her presentation regarding the policing of perpetrators of domestic abuse.

Additional sessions were also delivered by Audrey Gibb and Inga Heyman on the ‘Collaborative Outcomes Learning Tool (COLT) for Prevent’ project, and on Inga’s doctorate study in the interface between police, health services and those in mental health distress.

Commenting on their successful attendance at the conference, Emeritus Professor David A. Alexander said: “As the senior member of our Police Group I was really impressed by the quality of all my colleagues’ presentations. They did the RGU proud and the financial investment in our attendance, as the largest single team present, was ‘refunded’ by a considerable dividend.”