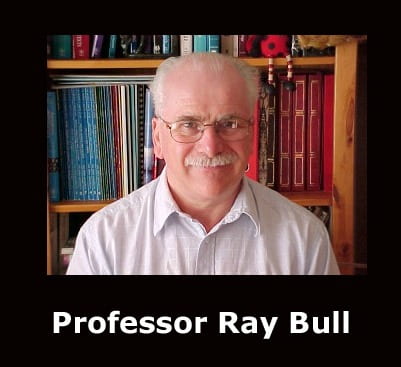 Dr Ray Bull is Emeritus Professor of Forensic Psychology at the University of Leicester.  His main topic of expertise is ‘Investigative Interviewing’, a topic on which he has published many journal articles and book chapters/books.  He has been asked to write ‘Expert’ reports in around 150 cases and has testified in courts on over 50 occasions. He regularly conducts workshops/training on investigative interviewing around the world. In 2014 he became (for three years) President of the European Association of Psychology and Law.  In 2010 he was elected an Honorary Fellow of the British Psychological Society “for the contribution made to the discipline of psychology” (this honour is restricted to 40 living psychologists).  In 2018 he accepted the invitation to be a member of the small ’Steering Committee’ that is writing the extensive guidance document on investigative interviewing as recommended to the United Nations by its ‘Special Rapporteur’ Professor Juan Mendez.